I am a fungible (don’t know the meaning?) resource

Human Resources – what a stupid name. It is almost patronising to think of someone as a resource, although admittedly it does feel better than its bullshit bingo ‘bigged up’ cousin Human Capital Management.

I specialize in Chemoinformatics and Banking & Finance IT development (I know this is an odd combination, but it works for me), with headline technical skills that include C# and Oracle. I have a whole bunch of other skills too, supplementary skills, basically a list of technologies or certain features of specific technologies. For a contract role application, it is not sufficient to just write .NET as a skill; the skill set needs to be fleshed out to include keywords LINQ, Entity Framework, Dependency Injection and many many more.  I am mid 50’s so I have a lot of experience under my belt, but in a contract role application, you have to spell it out too, after all I do not apply for roles for fun, I apply for roles to win the work and earn money and if you don’t sell yourself, you will not get shortlisted for interview. A software developer in any organisation cannot have the luxury of developing in just (VB or C# or maybe even F#) .NET and, colloquially, report back to his colleagues that “that is not C#, so I don’t do that or know how to do that, ask Freddie and see if he can help you”. Someone with that attitude wouldn’t last long as a contract freelancer or within a large organisation. In short, you have to have many skills, or better put, maaaaaaaaaaaaaaaaaaaaany skills. Don’t believe me … well just ask any seasoned developer what technologies they use in their day job. His/her answer to your question will be “all of them”.

I regularly see and apply for roles advertised on the job boards for a C# Developer, Oracle Developer, Web Developer, and even Software Developer, and all the roles contain some overarching sentence something along the lines of “The successful candidate will have experience in the following technologies, rarely a long list, and experience with other domain specific technologies, eg. Sungard feeds such as Agency Lending Disclosure,  PRIIPS, MiFID II, forensic DNA typing, laboratory automation. Of course there are the other throwaway sentences too, but you just quickly gloss over them – everyone does.

For anyone that has ever won one of these contract roles, it will be apparent on day one of the role that the role/job description rarely relates to the day job. Furthermore, once a specific project or task is complete, other tasks are quickly teed up with different and yet more unfamiliar technologies.

I have been in the IT freelance contracting game a while now. It has dawned on me that I am not a human resource, the term I despise, but rather a fungible resource, or fungible developer. Basically what this means, to me, is that whatever development task or project crops up, slot me in (aka. smash that square peg into that round hole), it might be a bit painful for me at the beginning and I might have to learn various aspects of the technology, but I will get it done. 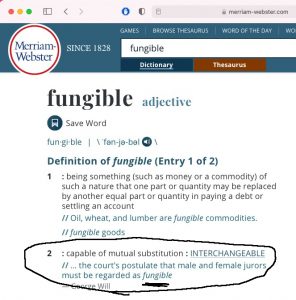 Despite very much disliking the term Human Resource, I quite warm to the idea of being redefined as a Fungible Resource, or better, a Fungible Software Developer. I think too it better describes what I do every day … there is just no misrepresentation about my skills (no I am not saying I am a jack of all trades, just that I am multiskilled and can be swapped in/out as required). Companies want this too; it is far from a bad thing!

I have ripped off an existing jobserve job advert and replaced the title with Fungible Consultant/Developer/Programmer. Given my experience, I believe too that it better describes the contract role being advertised.