Chemical Structures in Databases (blog article 7 of 8) : Under The Bonnet

As the SQL feature set doesn’t provide for chemical structures to be queried directly as shown below, the chemical moiety must first be translated into an alternative format supported by the DBMS. Typically the DBMS data type chosen is text VARCHAR, CHAR or unstructured data types such as a CLOB or BLOB. COTS examples of textual representations of chemical structures or reaction schemes include .mol or .rxn files, SMILES strings, and so on.

Under the bonnet within the extensible indexing component, these representations are decomposed into small collections of numbers, a fingerprint if you like. When a chemical database is searched for a specific chemical structure or substructure, this search structure is decomposed into a further set of numbers using the same algorithm. The database is then searched for matching number pairs using a DBMS language, eg. SQL, PL/SQL, T-SQL in possible combination with other logic implemented in C, C++ etc. within the extensible indexing component.

Consider half a dozen or so numbers between 1 and 40. The numbers you choose will most likely be different to the numbers chosen by friends, family, work colleagues, or the roll of a tetracontagonal die. For draw 103 January 2006, the National Lottery Euro Millions draw rolled over for several weeks. In the process hundreds of millions of tickets were purchase and the estimated jackpot rose accordingly. Punters just had to d

ecide on their numbers and purchase a ticket. Once the lottery had been drawn, everyone that held tickets with the same set of numbers as determined during the draw would have been entitled to share the estimated jackpot of £125 million Sterling (at the time, around €184 million, $330 million NZ)! Many chemical database systems work in very much in the same way. Chemical entities within the database will have been reduced to a small set of numbers when first populated into the database. Prior to querying the chemical database, the chemical entity being sought is reduced to a further small set of numbers using the same algorithm. The underlying SQL query executed matches the number pairs, those derived from the chemical entity being sought against those already in the database. This latter process is very much like searching a database containing all lottery ticket numbers against those determined during the lottery draw. For a database chemical structure search, there may be multiple rows returned (joint jackpot winners). When the result set contains no rows, the chemical entity is not in the chemical database (the jackpot rolls over). By reducing a chemical entity to a handful of numbers, the DBMS can quickly locate candidates that match initial search criteria. The candidate subset retrieved, possibly representing only one or two chemical entities out of hundreds of millions, can then evaluated with scrutiny to determine whether they match other search criteria not defined within the number set. This latter process is generally more expensive to perform than the initial query (see Subgraph Isomorphism). For this reason this more refined search is better performed on a candidate result set of a few, not hundreds of millions!

Why does it have to be this complicated?

I understand that SQL doesn’t allow me to search chemical structures directly, but why do I need all these numbers? Why can I just not search the chemical database for a molecular formula, relative molecular weight, or chemical name?

Use of the chemical name, or parts of it, as an identifying key in chemical database queries is not reliable. Any attempt to search a chemical database for chemical entities that contain an unsaturated normal linear chain of six carbon units, which includes n-heptane show above, would yield no hits for the search term “hexan” for example. Very clearly there are 6 carbon atoms in a linear chain in n-heptane yet chemical candidates would not be returned in the database resultset.

Within the extensible indexing component of the chemical database system, the chemical structure in question is first decomposed into predefined numbers, allowed values for the purposes of database indexing. For card based indexing systems, these categories could be a hole in a Cope-Chat card. In practice the number of categories would be in the range 20-80. A non exhaustive list of typical categories is shown below for Strychnine, Brucine, and Penicillin G. The numbers shown under the column headers Brucine, Strychnine, and Penicillin G for category ID’s 1 through 9 are the frequency of occurrence of the column header functional group (eg. brucine has 3 ether functional groups where Strychnine and Penicillin G have 1 and 0 respectively).

Adding a new chemical structure to the database

Extensible technology such as Oracle Data Cartridges typically fire an event for each relational database operation performed such as SQL SELECT, INSERT, UPDATE, or DELETE (named a CRUD operation), or DDL operations such as DROP, CREATE etc.

When a chemical structure is added to the database, ultimately using an SQL INSERT or UPSERT/MERGE statement, an event is fired to allow the extensible indexing DBMS component to update its indexes for the row being inserted. This event is not a database TRIGGER. Triggers are fired for only some database operations such as INSERT, DELETE, and UPDATE; they are not fired for SELECT, DROP etc. Within the event handling code, these numbers are generated from the chemical entity being inserted vide supra.

When Strychnine is first inserted into the chemical database system, the extensible component would have to: 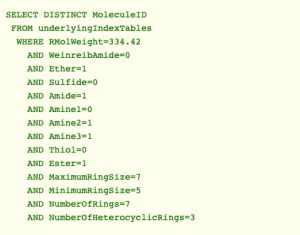 Each graph isomorph is a database hit for an exact structure search. Each adjacency matrix comparison that does not exactly match is not processed further and through the DBMS callback implementation of the extensible indexing component, is not included in the final database resultset.

For a substructure search, such as searching a chemical database for strychnine-like compounds such as Brucine, or other base structures endowed with various R-groups or open valencies, each subgraph isomorph is a database hit. As before these hits are returned through the DBMS callback implementation of the extensible indexing component to be included in the final database result set.

This is the seventh of eight blog articles with a subtitle of “Chemical Structures In Databases”. The prior article can be located here and the final article is in preparation.