As part of a data size reduction and chromatogram smoothing PoC project, I needed to implement a Hello  ‘Centred Moving Average’ algorithm on a large number of UV data sets.

I had naively expected to use a search engine to search out an existing code implementation, tart it up a bit, and move on with some of the more interesting aspects of the project. Somewhat surprisingly, there is little ‘out there’, and certainly not in the technologies I require, viz.  Matlab, Excel, C#, and (Oracle) SQL (two required for quick prototype/demo code implementations, Excel and Oracle, and the other two in the PoC code I had to deliver).

I had to write my own implementations. For a PoC application, I don’t need to worry much about the edge cases, nor the code efficiency, nor even if the independent variable was equidistantly spaced, I just wanted a small handful of basic implementations and to prove it does what I need it to do in downstream processes. During the exercise it came as quite a surprise to me, a seasoned curly brace language and SQL developer, how vastly different the four algorithms were in these four programming languages. A ‘diff’ tool would have found very few similarities in the source code.

Note: Despite the coding implementations being trivial, I have uploaded the four examples to github here: https://github.com/michaeldoshea/CentredMovingAverage Use them as you see fit.

Not unsurprisingly Matlab was very suited to the task, and immediately became as my trusty reference implementation of the calculation results. The code was also the most minimalistic and easy to understand. 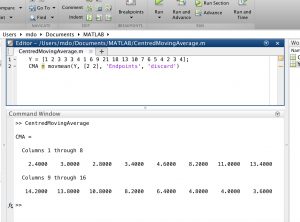 Another MatLab implementation of UV data smoothing using the Savitzky-Golay algorithm was not so trivial.

Ubiquitous Excel proved again to be very suited to this type of calculation task too, and also easily enabled me to gild the lily a bit by assigning names to a few cells, and performing calculations based on a configurable midpoint offset (the fixed window size, as coded, being 2*midpoint offset + 1).

A C# LINQ implementation of the Centred Moving Average (as opposed to some sort of horrific piece of logic with arrays, array offsets and loops of loops, and a lot of debugging pain even for a task this simple) could also be achieved in a very readable and maintainable form. Without the use of external libraries or a home-rolled extension methods, the example code below just must be the minimal logic required to implement a generic Centred Moving Average.

Writing this type of algorithm with SQL can be achieved, as demonstrated below, but it is very messy. Despite occasionally finding this type of code in production systems, SQL isn’t really the first language of choice for this type of task. Or the second, third, or fourth choice either, clearly. I suspect leveraging R Services (if using Microsoft SQL Server of course) to perform these types of calculations would be a move in the direction of ‘using the right tool for the job’.