How would you determine the frequency of letters in a string using C#? If your mind naturally wandered down some abstruse solution involving loops and 2D arrays containing the ASCII code of the letter and a value for the letter frequency and so on, albeit briefly, and you proffer your skills as a C# developer, then your skills are close approaching being a decade out of date.

Every time I see this type of code construct, and it is very often, I unilaterally make the decision to clean-it-up and do it properly. Properly to me means LINQ. The functionality is bordering on trivial in LINQ too – just look at the code below: 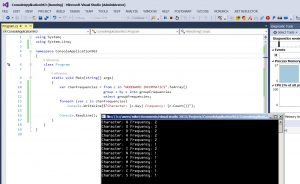 Of course LINQ is so much more powerful than I have demonstrated in this small example, and there is a great 101 examples resource available from Microsoft demonstrating so much more too, but for some reason many developers insist on reinventing the wheel with a buggy for loop and arrays and a bunch of if statements for the edge-cases and so on.

Of course the world hasn’t stood still since the availability of LINQ just under a decade ago (I dwell on LINQ as it’s just a hobby horse for me), just look at the proposed C#7 feature list !  Things are and continue to move fast in .NET “land”; it’s frightening.